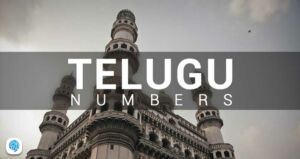 In olden days people used to call Telugu with many names such as Telengu, Tenungu, Telinga. Saga Kanva is the first grammarian of Telugu and Rajeswara Sarma stated about the historicity and content of Kanva’s grammar in Sanskrit. 16th century during the rule of Krishnadevaraya (Vijayanagara Empire) is considered to be the Golden Age of Telugu. Lyrical compositions of Karnatic music are mainly done by using Telugu due to its vowel ending sounds. In 1966, The Andhra Pradesh Official Language Act declared Telugu as the Official language of the State of Andhra Pradesh which is currently divided into Andhra Pradesh and Telangana.

Telugu Numbers, as in other languages start with the number Zero(0) or ‘Sunna’. All single digits except zero end with a sound “oo” or “ee” which is really important during pronouncing of Telugu numbers.
Numerical numbers of Telugu:
0 is the same in both English and Telugu
1 looks like zero was erased at the bottom
2 is a little like English 2 without the horizontal line
3 remains almost the same as in English
4 is like an English 8 erased at the top
5 has the symbol depicting something like a human being
Six(6) and Nine(9) when inverted in vertical direction look the same
Seven(7) is made to twist to make  a reverse S
8 is obtained by inverting the Telugu 1 in and adding a small line
Below is the list of numbers starting from one to ten:

While calculating in really big numbers and dealing with complex numbers which involve numbers which are more than just two-digit numbers, we use numbers beyond 100.
As in the case of two digit numbers same happens with three digit numbers:
Numbers 100-199 start with “nuta” and the rest two digits are the same as previously discussed
Numbers 200-999 start with rendu, mudu, nalugu, aidu ……..  and has “Vandal” for hundred as shown in the table below
For four digit numbers “Thousand” in case of English is same as “Veyyi” in Telugu and the rest three digits are framed as discussed above
For five digit numbers “Lakh” in case of English is same as “laksa” in Telugu
For seven digit numbers “Crore” in case of English is same as “Koti” in Telugu
Consider an example 276493:
In English we write it as “Two lakhs seventy six thousand four hundred ninety three”
In Telugu,
2 is in lakhs place so it is “Rendu laksalu” in English it is Two Lakhs
Next is 76000 so it is “debbai aru vela” in English it is seventy six thousand
Next is 493 so it is “naluguvandala tombhai mudu” in English it is Four hundred ninety three
Below is the list for some more numbers which can help you out compare them as shown with the example:

You can use our free learning app which helps you to come across a lot of Telugu numbers and phrases, practice lessons to improve your Telugu basics.